On a typical British day with the sun out; yet gloomy clouded sky, I accompanied thirty volunteers, brothers and sisters aged from thirteen to late thirties. We were a diverse group with different British ethnic backgrounds. We were all making our way to Central London with the intention of representing the true Islamic teachings and to celebrate Eid Al-Adha with our fellow Londoners.

The Islamic Unity Society (IUS) started this initiative earlier in the year in 2015 aiming to spread the beautiful values of Islam through the distribution of roses. Each rose was attached with a saying from Prophet Muhammad (pbuh). IUS believes that we should follow in the footsteps of our Holy Prophet Muhammed (pbuh) by spreading happiness and love with others, “He who makes peace between people by saying good things, or sharing their happiness with others is a true believer” said the holy Prophet of Islam. Hence for Eid Al-Adha; IUS, Love Mohammed, IMM and Dar Al-Islam all came together and organised the blessed initiative known as ‘Peace and Love’ distributing thousands of colourful roses on the streets of London. The aim to show respect, love, and peace to our fellow citizens regardless of race or religion. 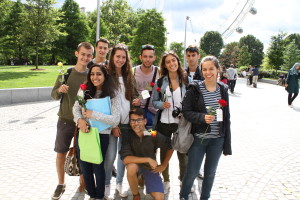 We split up into small groups and spread out over several locations, which included Westminster station, Parliament square, The London Eye, and Southbank. This project was not in any way inviting people to convert to Islam, but rather our intentions were to share our values with members of the public, as we are all created equal and are all travelling towards the same destination. Even though we may differ in race and religion. As Imam Ali (as) says, people are of two kinds, either your brothers in faith or equals in humanity.

We went out there with the belief that it is our duty as Muslims to inform others about Islam especially with many conflicting ideas being portrayed about Islam. The aim of our gathering was to hand out three thousand colourful roses each with a special message, hoping to spread peace and love amongst fellow Londoners. “To volunteer for such an initiative felt very spiritual,” says Mohammad Araghi (Head of Love Muhammed initiative). He continued by saying; “we are following the Sunna of the Prophet and the Quranic tradition which says, “’in the prophet of Allah lies the best example’” and we showed this by doing what the holy Prophet (pbuh) would do if he were alive today.” Each rose carried a message of peace and love from our beloved Prophet Muhammad (PBUH) and Imam Ali (AS). An example of the messages that were given out read: “Be like the flower that gives its fragrance to even the hand that crushes it.” Imam Ali (AS)

People were ecstatic to receive the roses and some even requested more tags just to read the hadiths. One of the pedestrians hugged one of the volunteers saying “Islam isn’t being portrayed in the Media in the correct way, they should be here now filming your initiative as you are really helping members of the public understand Islam for what it truly is, not the terrorists abroad.” Many people asked if they can pay for the roses as they were curious as to why free roses were being given out, when we informed them of our intention they were very thankful and many stated “Islam is a beautiful religion and people like you are really representing the beauty of your religion.” The feedback we received as a whole was very positive and we were praised at what we were sharing with them. We received a lot of encouragement from the general public and they were suggesting we carry out more events like this as everyone can share in the peace and love.

We wanted to celebrate the Islamic festival of Eid, sharing our happiness and love with our fellow Londoners to build bridges – alhamdulilah (Praise be to Allah) the results were very positive.