Visiting the shrines in Iraq

I looked around me. The sight of masses of people walking around in draping black garments, sitting down on fine Persian rugs, reciting, reading and contemplating was alluring. I stared up at the ceiling; I was mesmerised, almost drowning into the intricately designed floral panels, golden boards, stunning silver chandeliers flowing out from the ceiling with huge beads, crystals and shining lights.

As I sat in the middle of the crowds, watching people flowing in and out through the huge carved wooden doors, tears flowing down their cheeks, I was overwhelmed. I glanced to the other side where I could see groups of men and women, listening, interacting and crying along with a speaker or a reciter reading a eulogy for the Imams.

Seeing a shrine for the first time in my life was a deeply poignant experience. In fact, it was so emotional I didn’t know how to react. Cry? Smile? I didn’t know what to do. I was bowled over. I forgot about the distresses and worries of this world, I almost felt as though I was in a special spiritual mirage.

It was an early start the next day. I offered my Fajr Salah (morning prayers) in a near to empty shrine, where I could sit in front of the silver Dhareeh clenching onto its bars tightly, spilling all the Duas I knew, the things I needed and wanted to the 7th and 9th Imams (Imam Musa al-Kadhum and Imam Muhammad Al-Jawad (as)), asking them for the return of the awaited saviour, begging for peace and the eradication of tyranny and corruption. 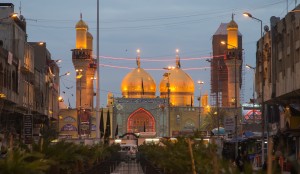 The next destination would be Samarra, the home to the shrine of the Askariain (Imam Ali Al-Naqi and Imam Hassan Al-Askari (as)). It was a heartbreaking sight. The mountains of rubble and debris, ruins from the dome that was demolished and completely destroyed years back, still remained in front of the holy shrine. Inside the sound of the heavy machinery working round the shrine trying to repair a devastated heaven was heard. As we sat on the beautifully woven carpets in the open air, reading Duas (supplications), pleading for the intercession of the Imams, my eyes kept travelling to what was around me. Inside, the shrine was not even complete, it was wooden box draped in a black cloth. It stung to see that haters could inflict so much damage, so much pain.

We were back to the hotel in Kadhimiya within a few hours. I stayed in Kadhimiya for the next two days and again an early start was required for a three hour journey to Najaf. On the way, we saw the Al-Furat (Euphrates) river. My uncle’s eyes glistened with tears as he cried out that this was the very water Imam Hussain (as) did not get to drink. Then came a round of latimiyas (eulogies) and I could almost hear the wails of Zaynab and Sukaina.

Getting to touch the Dhareeh of Imam Ali (as) in Najaf proved to be a struggle. I could almost just hold on to it from far, any closer or putting my cheek on it was a far-fetched dream. Even as I stood holding it from a distance, I was crushed between the masses of indifferent people, all coming to the Imam (as) for their own reasons. I heard some making their Dua out loud; for a relative who was in a fatal condition, pleading for betterment for some they knew.

The following day we paid a brief visit to the first Imam (as) and then went to Kufa where he had led the Islamic state. The hustle and bustle of people scuttling round the marble floored courtyard in the middle of a mosque which surrounded the arena perfectly depicted the picture of how it must have looked centuries ago. However, this place also held a torrent of emotions. It homed Muslim ibn Aqeel, the cousin of Imam Hussain (as), betrayed by his own followers; it was here where the people’s swords were against the Imam, here where the masses turned their backs to the Imam and darted away from truth and justice.

Karbala was our destination for that same afternoon. After a much required rest at my uncle’s house, our residence for the while in Najaf, we headed off. Walking down the road to the shrine where the red flag was raised high above the glimmering, golden dome, I tried to picture how it must have looked 1400 years ago. In the heat of the battle, the children crying of thirst, the women attending to everyone’s needs, the desperate overflow of Duas and prayers inside the tents. Now it was transformed into a memorial which attracts millions of visitors annually to pay their allegiance to the Imam (as).

The shrine of Al-Abbas was just as touching. Being flag bearer and the loyal brother of the Imam came with a price. Here we were, here we stood, in our thousands to commemorate the sacrifice he made for us.

With our eyes filling and spilling with tears, we walked Bain Al-Haramain (between the two shrines) as I was remembering, recalling and contemplating over the many stories I had heard of Karbala.

As we climbed into the minicab, ready to be shuttled back ‘home’ to Najaf, I could proudly say that I had seen all the Imams in Iraq. It was a majestic visit that I was honoured to have experienced, and one which I pray every Muslim will live to experience too God-willing.

Credits: All images are from flickr. Red Karbala. Karbala. Candles