Sitting in Bridge Park Community Leisure Centre with the leader of the Brent Council, the Mayor of Brent, local charities and businesses, local school children, volunteers and users of the Food Bank all gathered to celebrate Sufra NW London, it is not difficult to realise that Sufra NW London is more than a food bank. It is apparent that a lot of people have invested in Sufra NW London and the whole community has really united in support of it.

“It brings together hundreds, if not thousands of people from all faiths, cultures and backgrounds to contribute to the common good of those who live on our doorstep.” – Mohammed Mamdani, Director of Sufra NW London 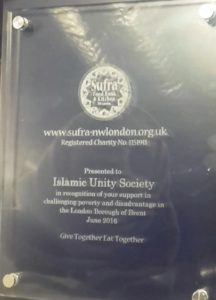 Thirty-one individuals/businesses were presented with awards during the celebration. One of the recipients was Rui Martins, a previous user of the Food Bank who is now a very active and inspiring volunteer at Sufra NW London. We heard from Abayomi and Dahir who joined Sufra NW London after completing one week of work experience at the charity. “They represent a new generation of young people on whom we rely for the betterment of our community”, said Mohammed about the young boys. Everyone I spoke to took great pride at being a part of Sufra NW London and pledged their continued support to its continuing success.

“As I look across the audience, I can see people who have made our work that little bit easier, because of their commitment and contribution to the cause. I am eternally grateful.” – Mohammed Mamdani, Director of Sufra NW London

“More than 29,000 children in North West London are living in severe poverty and may go to bed hungry. Families across the borough are struggling to survive with rising prices, benefit caps and high unemployment. Even those families who may have been comfortable can be caught off-guard when a mother or father is suddenly made redundant. Sufra NW London provides a life-line for families who simply don’t have enough food to eat.”

Sufra NW London was set up in April 2013 by a partnership of 4 charities committing an annual investment of £35,000 for a 3 year period to establish a food bank service that not only provided food aid, but also an array of subsidiary services that contend with individual experiences of poverty.

“Sufra NW London has demonstrated the power of partnerships in achieving veritable social outcomes. Working alongside statutory organisations, voluntary sector agencies, as well as faith and civic groups, you have made a lasting impact in aligning services, innovating new approaches and contributing to the council’s strategy and policy in reducing poverty across the Brent.” – Councillor Muhammed Butt, Leader of Brent Council

The word “Sufra” originates from the Persian meaning ‘table-setting’ or anything ‘on which food is served’.  The term strongly indicates hospitality and generosity towards guests through the service of food and refreshments. Sufra NW London has embodied this and welcomes its users, referred to as ‘guests’, with a hospitality that is rare in a food banks.

The striking thing about Sufra NW London, though, is not the traditional Food Bank service, but its commitment to the local community through several programmes set up over the past three years.

“Sufra NW London has redefined the traditional food bank model and integrated the provision of emergency food aid within a wider programme of community regeneration. Poverty and deprivation are complex phenomena; they go beyond the lack of subsistence to encompass health inequalities, a shortage of skills, overcrowded housing, poor wages and lack of networks, to name but a few.” – Mohammed Mamdani, Director of Sufra NW London

Sufra NW London provides a hot meal service, called the Community Kitchen, which serves a 3-course vegetarian meal, served restaurant-style to the tables and attracts an average of 30 guests per week.

Staff and volunteers provide personally tailored advice and advocacy through their Welfare Surgeries. Sufra NW-London also supports a wide range of national and international research projects in partnership with various universities on the impact of welfare reform.

Sufra NW London trains young people under the age of 25 years in basic cookery skills through the Food Academy programme. The course is an accredited qualification, which participants can use to apply for an apprenticeship or employment in the catering industry.

What the future holds

“The Director’s Report pays tribute to the important role of the founding partners in getting Sufra NW London off the ground. The commitment made by Al-Mizan Charitable Trust, Beta Charitable Trust, BW Foundation and the Islamic Unity Society to support Sufra NW London for its first three years was crucial. I hope that they are proud of the results of that commitment.” – Diarmuid O’Hegarty, Chair of the Board of Trustees

“Giving charity, feeding the homeless and looking after the poor are amongst the most recommended actions in the religion of Islam. According to an article in The Times in 2013, Muslims are Britain’s top charity givers based on the ICM poll. It is great to see how different organisations have come together to support this great cause of serving those in need and to contribute towards the society they live in. We are grateful for the commitment of all those involved and hope that through this partnership we can contribute towards reducing poverty in NW London and, hopefully, expand to other boroughs.” – Dr Mohammad Ehsan Rangiha, Chair of the Islamic Unity Society