The Islamic Unity Society took part in the #RosesForPeace national campaign, where 12000 roses were distributed on December 18th 2016, across 5 different cities in the UK; London, Manchester, Leeds, Birmingham and Newport.

The reach on Twitter was phenomenal, with one million accounts being reached (and counting!), and fantastic responses and engagement on different social media channels.

#RosesForPeace campaign is a grassroots interfaith and intrafaith campaign helping to bring people together around the message of peace.

The roses were tagged with peaceful quotes from Prophet Mohammed (PBUH), to honour him on the occasion of his birth anniversary, and to share our happiness with the public.

People’s reactions were incredible. Some couldn’t help but hug us and take pictures with us whilst others cheered us on saying: “This is how it should be done!”

There were also some passers-by who were hesitant of taking a rose from a hijabi/ bearded stranger, probably from the misconceptions that have spread about Muslims over the past years. However, this is exactly what we want to change through acts of kindness, with the ultimate aim of creating a lasting positive impact. A few people were hesitant thinking that they had to pay for the rose, so it was a welcome surprise to them when we said it was a free rose.

Volunteers across the regions also enjoyed the day, and are looking forward to next year’s #RosesForPeace distribution, to continue on this grassroot message of peace. 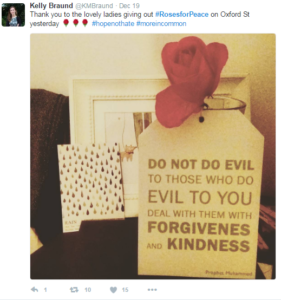