In Islam, Hijab includes the way a person walks, talks, looks, acts and thinks. All of this should be done modestly and is applicable to both men and women. This statement defines hijab in the simplest way, however there are still many misconceptions about the hijab and what role it plays.

The duty of the hijab is not to imprison nor oppress men and women, rather to preserve modesty and morality. It serves not only as an effort to subdue one’s ego but also centers on the tendency towards asceticism and an increase of one’s dignity.
Although the philosophy of hijab might be seen as quite complex to others, an attempt at simplifying it can be done by sharing personal experiences.

World Hijab Day, held each year on the 1st of February, is a day that encourages Muslims and non-Muslims across the world to experience and learn more about the hijab.
At the University of Hertfordshire, student members of the AhlulBayt Islamic Society (AbSoc) held their own ‘World Hijab Day’ event to invite people to share their views and thoughts on hijab and to clear any misconceptions.
Throughout the day, Muslims and non-Muslims were engaging together in discussion about their opinion of what hijab is. A ‘Hijab Booth’ was also set up where women were able to experience wearing the hijab scarf personally and get their picture taken. This was not to represent the scarf as a fashion statement but rather to allow people to see and feel how normal it is, in contrast to the negativity portrayed about it through parts of the society and media.
Fundraising at the event involved selling tea, biscuits and cakes (the most famous being the doll in hijab cake) as well as a book sale, featuring books about hijab in Islam. At the end of the day over £100 was raised for the Breast Cancer UK charity. 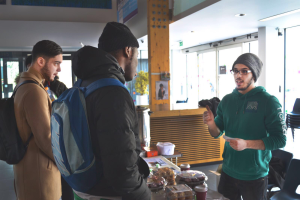 Overall, the event proved to be quite successful. It was delightful to see that many of the women, who don’t wear the hijab scarves, were enthusiastic about trying one on and some even went on to purchase scarves for themselves. More importantly; none of the people who attended the event, when spoken to, left feeling that the concept of hijab itself was negative or problematic.
Here is what some had said on the day:
“It’s very empowering, and it being oppressive is a misconception. Every time I go out, I see more women in hijab, which shows the power of it and the unity and the message of it, which is modesty. It can be applied to all women not just Muslim women.”
“I am from Nigeria and there are many Muslims there. I am an approver of the hijab because it’s about what you believe in. There shouldn’t be any discrimination about it.”
“To be honest I don’t feel like I’m wearing the hijab. It’s so comfortable and I’m so used to it, I love it. And although I’ve faced some racism, which can be upsetting, I just try to ignore it.”
The aim of the day was not an attempt of conversion or to force others into wearing the hijab; rather to engage with others to build a greater understanding about what hijab in Islam represents for both men and women. People saw past the cover and realised that the hijab should not give reason to assume oppression and it means much more than what one wears alone.

Although volunteers and donations run events like these, many Muslims wish to keep this initiative running continuously in the UK in hope to build a more collaborative, cohesive and accepting society.