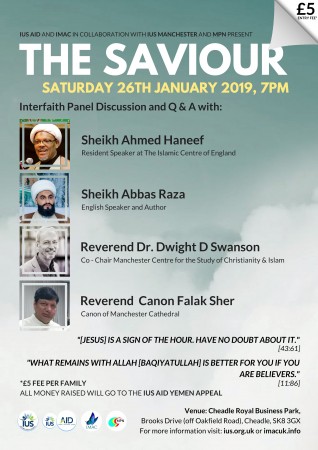 A first of its kind event, Imam Mahdi Awareness Campaign and IUS Aid along with sponsors Momin Professional Network and IUS Manchester are proud to host:

£5 entry fee per family goes to our Yemen Appeal

This event aims to discuss the similarities between Islam and Christianity, in respect to awaiting a saviour. Muslims await the coming of Jesus (as) as well as awaiting Imam Mahdi (as). The concept of an awaited saviour is also common in other faiths. 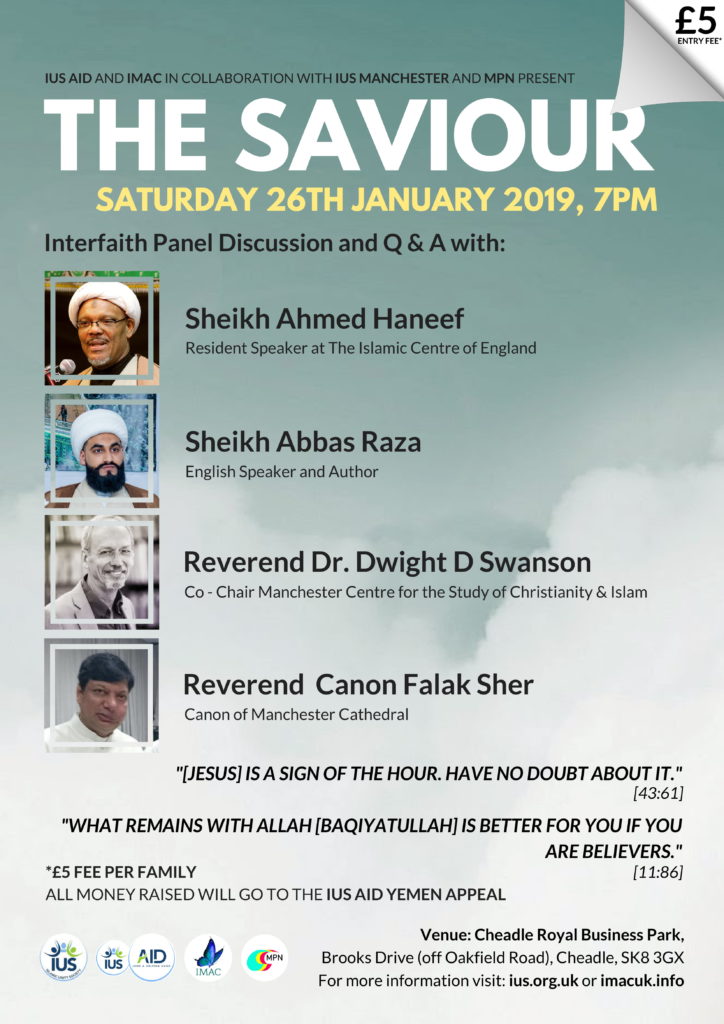 Senior Research Fellow and Senior Lecturer in Biblical Studies, and Co-Director, Manchester Centre for the Study of Christianity and Islam,  Nazarene Theological College.

Dr Swanson’s teaching career has included posts at European Nazarene Bible College, Switzerland and Asia-Pacific Nazarene Theological Seminary, Manila. His research interests have moved to the Bible and Islam/Qur’an. He is currently working with the Centre for Muslim-Christian Studies in Oxford on the project ‘Reading the Bible in the Context of Islam’. He also contributed a number of dictionary articles to The Global Wesleyan Dictionary of Theology (Beacon Hill Press, 2012), Theologisches Worterbuch zu den Qumrantexten(Kohlhammer, 2011) and The Encyclopedia of the Bible and Its Reception (Walter de Gruyter and Co.).

The Revd Canon Falak Sher, Priest in Charge of The Ascension, Hulme and St Werburgh’s, Chorlton, was made a canon of Manchester Cathedral in 2017 becoming the first Asian member of clergy in the North West to be so honoured.

Having first come to the UK in 1998 for major surgery after a diving accident left him with a damaged facial nerve, Falak trained for the ministry and has worked as a priest for 13 years with the Pakistani and wider Muslim communities in Greater Manchester.

Falak has worked tirelessly to find imaginative ways to help build bridges with ethnic communities in the city. At St Edmund’s, Whalley Range he was curate to Christians from the Pakistani community. They now worship at St Werburgh’s in Chorlton, and the new Fresh Expression for young families, Global Harmony, offers a bilingual service that is attracting young families.

Falak also supports Ugandan Christians who worship at The Ascension Hulme. Services are held in their own language and also together with the regular congregation.

Falak is well known to the Muslim community and, as an Anglican priest, is regularly invited to preach and pray in Mosques. By building friendships, he has helped different ethnic communities come together and understand one another better.

In response to the homeless crisis in the city, Canon Sher has set up a Curry Club, and can be found on a Friday evening waiting on tables in his home, serving curries cooked by his wife, Rina. Money raised supports the homeless, and 70 rough sleepers were treated to a Christmas dinner in the church hall.